The redundancies at Deutsche Bank show we’re still feeling the economic effects of 2008. In an extract from a new edition of his book The Ascent of Money, Niall Ferguson warns more turmoil is on the way 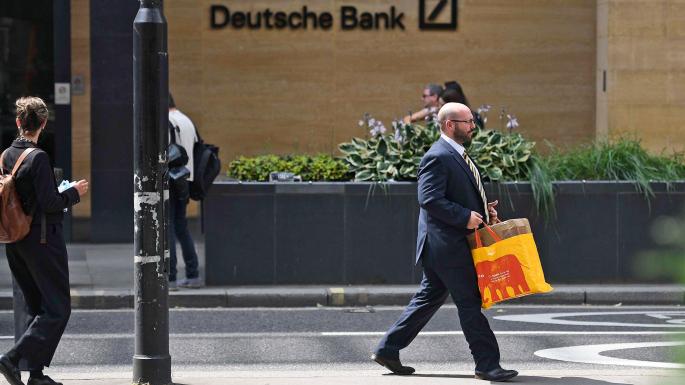 A man leaves the Deutsche Bank building in central London after the company announced the first of 18,000 job cuts globally LEON NEAL

Ten years ago, few people would have predicted that in the summer of 2019 Donald Trump would be campaigning for a second term as president of America. The idea that Boris Johnson would succeed Theresa May as Britain’s prime minister would have seemed deranged.

Yet it was not so hard to foresee that there would be a political backlash in the aftermath of the global financial crisis — a backlash as momentous and enduring as the economic repercussions, which continue to make themselves felt, not least on battered banks such as Deutsche Bank, which made the first of 18,000 planned job cuts last week.

“There will be blood,” I told an interviewer in February 2009, “in the sense that a crisis of this magnitude is bound to increase political as well as economic [conflict]. It is bound to destabilise some countries. It will cause civil wars to break out that have been dormant. It will topple governments that were moderate and bring in governments that are extreme. These things are pretty predictable.” I also hypothesised that some governments — notably the Russian — might resort to foreign aggression, though I reasoned wrongly that President Vladimir Putin would be deterred from invading Ukraine by the economic costs of doing so.

In 2011, as the crisis was spreading across the Atlantic to Europe, I added some more political predictions. The eurozone would not break up, I argued, but add new members. However, Britain would vote to leave the EU. And conflict in the Middle East would escalate.

The financial crisis did indeed have profound political consequences. In a number of Arab countries — notably Tunisia, Libya, Egypt, Yemen, Syria and Bahrain — there were revolutions, mistakenly dubbed an “Arab Spring” when they began at the end of 2010. In nearly all western democracies — Germany was a rare exception — incumbent politicians were displaced, often by younger figures less tainted by association with the financial elite and the policies it had favoured. In February 2014, following mass protests in Kiev and the flight of the country’s corrupt president, Viktor Yanukovych, Russian forces and pro-Russian separatists seized control of the Crimean peninsula and later the Donbass region.

In 2016, the unexpected results of Britain’s referendum on EU membership and America’s presidential election led many liberal journalists and academics to write fearfully about a general crisis of liberal democracy — a “democratic recession”, in the words of the Stanford political scientist Larry Diamond. A “deep gloom . . . arrived in September 2008”, wrote the New York Times columnist Frank Rich last August. “When the collapse of Lehman Brothers kicked off the Great Recession that proved to be a more lasting existential threat to America than the terrorist attack of seven Septembers earlier. The shadow it would cast is so dark that a decade later . . . one conviction . . . still unites all Americans: Everything in the country is broken. Unlike 9/11, which prompted an orgy of recriminations and investigations, the Great Recession never yielded a reckoning that might have helped restore that faith. The Wall Street bandits escaped punishment, as did most of the banking houses where they thrived. Everyone else was stuck with the bill.”

Yet the relationship between financial crisis and politics was not so straightforward. If it were, surely Bernie Sanders would now be president of America and Jeremy Corbyn prime minister of the UK. After all, they and left-wing politicians like them were the ones who called explicitly for bankers to be jailed for their role in causing the crisis. “It is an outrage that not one major Wall Street executive has gone to jail for causing the near collapse of the economy,” Sanders said in a statement published in October 2015.

This was a recurrent theme of his campaign for the Democratic Party’s presidential nomination the following year. Yet it was Hillary Clinton who won that contest — a candidate whose leaked speeches for Goldman Sachs and the fees she received came as no surprise to those familiar with the Clintons’ many years of sweet-talking Wall Street.

She in turn was defeated in the presidential race by Donald J Trump, a candidate who boasted in a May 2016 interview, “I am friends with all the major banks. They are dying to do business with me,” and proceeded to appoint Goldman Sachs alumni to key positions in his administration, including Treasury secretary, director of the National Economic Council and chief strategist. The self-proclaimed “king of debt” had not seemed self-evidently likely to be the beneficiary of a backlash against the financial system — which was one of the reasons so few professional pundits foresaw his victory.

History helps explain why the financial crisis was so much more beneficial to right-wing populists than to their left-wing counterparts. “Jail the bankers!” no doubt has its appeal as a slogan, but blaming economic hardships and disappointments on immigrants and foreigners would seem to be a more politically potent strategy.

There have been many financial crises in the western world since the first era of globalisation in the late 19th century. In most cases, right-wing populists have been the political beneficiaries. The best explanation would appear to be the greater psychological power of their arguments. The main losers of a financial crisis are a heterogeneous group, after all: they are not the welfare-dependent underclass, who had relatively little to lose, but the financially exposed or precarious middle class. People who have lost homes they owned or white-collar jobs that conferred status and income are not especially receptive to a classical socialist message of increased government control and fiscal redistribution. They are more likely to respond to the right-wing populists’ arguments for immigration restriction, trade protectionism or a departure from monetary orthodoxy.

On closer inspection, the populist backlash that produced not only Brexit and Trump but also six different populist or partly populist governments in Europe and twice as many successful populist parties was the result as much of increased immigration and increased inequality (or the perception of increased inequality) as it was of the financial crisis per se. In the case of America, the rise in the share of foreign-born workers in the population, the increase in the proportion of income going to the top 1% of households, the stagnation of the average household’s inflation-adjusted income, and the decline of prime-age male participation in the labour force were all trends — like the shocking increase in mortality rates for middle-aged non-Hispanic whites — that dated back to the turn of the millennium.

The financial crisis may have acted as a catalyst for popular revulsion against the political establishment, but it was by no means the sole cause of the “great revolt”. This helps explain the apparent paradox that the principal political beneficiaries of this revolt — the Brexiteers and the Trump economics team — were proponents of financial deregulation.

History loves irony. The financial crisis was predicted by few economists. Even fewer political commentators foresaw its consequences. But financial history is a better guide than economics or political science. A decade ago, the horses to bet on were the wild ones: the right-wing populists whose slogans were “America first” and “Take back control”. Today, I’ll place another bet: that these wild horses, with their shaggy blond manes and galloping deficits, are pulling us all towards the next financial crisis.

© Niall Ferguson 2019. Extracted from The Ascent of Money: A Financial History, an updated edition published by Penguin at £10.99

Niall Ferguson is the Milbank Family senior fellow at the Hoover Institution, Stanford

Don’t Let China Mint the Money of the Future

GameStop, Robinhood and the Return of the Wind Trade

After the Pandemic, a Pile of IOUs